Here is an essay that appeared on the LoveInshallah blog yesterday. It’s about an expereince I had soon after my son was diagnosed with cancer. It’s now been seven months since my son finished his treatment, and . He’s healthy and happy. I’ve never been more grateful. Thanks for reading.

Tonight the rains flooded the parkway, turning my twenty-five minute commute into an hour and a half.  Butterscotch, our year-old puppy, greets me at the door, belly up. I give him his ritual tummy rub and call out to my son, “I’m home.” Ali comes out of his room, kisses me hello, and says, “I gotta go.” He runs back to his computer to continue world domination and sling-shooting birds at pigs.

This time last year I spent many nights stuck in traffic. Only I wasn’t driving home to my son.

Ali was in the back seat, hooked up to bags of saline so his body would stay hydrated and the chemo levels would come down before there could be damage done to his kidneys.

Remembering that, takes me back:

My kid has cancer.  That’s what I tell the highway patrolman when he pulls me over on my drive from New York City to Rochester. I was three hours and thirty- four “’tis-the-season-to-be-jolly” songs into the six-hour drive, and it had just started to snow when the red lights swirled in my rearview mirror. I wasn’t even supposed to be making this trip until morning, but my son, Ali, is with his dad tonight, and I knew I wouldn’t be able to sleep anyway.

It’s past midnight, and my car is the only car on the road. I wasn’t speeding. I am sure of this. Speeding takes more focus than I had in me at that hour.

“Do you know why I pulled you over Ma’am?”

“No,” I say, without making eye contact. I don’t act like I usually do when in the face of authority, well, authority carrying an unconcealed weapon, that is. I wasn’t jumpy and apologetic, admitting to anything or lying about something, just so I would be let go.  Sent on my way.

No, officer, I didn’t see the light turn red, I thought it was still yellow…Eighty?  Was I doing eighty? That’s impossible. I thought I was doing sixty-five.  My speedometer must be broken officer.

I wasn’t intimidated. I was just numb. Fed up. Sick and so very tired. Still, wanting to know from God, from science, from doctors—specialists and surgeons—from anyone or anything how Ali, my son—an enthusiastic, precocious (aka, royal pain in the butt) sixth grader, could possibly have cancer. Just a little pain, a twinge, in his arm, he said. Nothing that would get in the way of him walking a puppy if he was to wake up Christmas morning and find one barking under the tree.

I wanted someone or something to explain how a child as relentless as Ali, would soon join the ranks of the smiling, bald children on those donate-to-cancer-research commercials who look like they need so much more than you could ever possibly give.  Ali? My son?  The same kid who knew the meaning of sarcasm when he was three and walked around all day practicing. “Mommy, does this sound sarcastic? How about this?”  Sarcastic kids with dry senses of humor aren’t supposed to get diseases like cancer.  They get hit in the face with baseballs, soccer balls, and dodge balls because they can’t catch. They can hook up the wireless-internet at four years old, but can’t tie their shoes until they’re ten.  The ironies of life are what a kid like Ali is supposed to struggle with. Not cancer. Where’s the irony in cancer?

“License and registration,” he says, tipping his hat back, and still not telling me why I was pulled over.

I hand him my license.

But my damn registration isn’t in the glove compartment or tucked in the visor as my father always insist I do, but don’t. Oh, maybe it’s on the floor?  Or under the seat?  No and no.  I still don’t know why I was pulled over, but with no registration, now I’m pretty sure I’m getting a ticket.

I knew this girl who once let a female cop fondle her breasts. One more point and her license would have been suspended. I’ve never gone to those lengths, but I certainly didn’t judge her for doing what she thought she had to do. I could even understand it. Maybe because it was a female cop it didn’t sound as disgusting and violating as it would have sounded to me had it been a male cop, but that’s my own sexist shit to work out. Right then, with a bank balance that just that morning squeaked by to cover the $9.95 monthly Netflix bill (I haven’t even used our Netflix in six-months), I was in no fiscal shape to cover a traffic violation, but I didn’t give a fuck. Not even enough to show one boob.  Actually, if I smart-mouth him, I can get myself arrested, I think.

Time away, alone to think, and maybe to finally feel what I haven’t been able to feel since my son’s pediatrician, on the back of the A&P receipt I shoved in front of her, wrote down the four possibilities she thought the pain in my son’s arm could be. She resisted at first. She didn’t want to worry me until all the tests were done and they knew for sure what we were dealing with. She wanted to spare me the hours she knew I’d spend, frantic, on Internet searches, but I needed to know.

I am not one of those people.  I need to know all the possibilities, remote or otherwise. I need to spend hours searching on the Internet. Yes, it can, and often does, cause great anxiety, but that’s what generic anti-anxiety meds are for. I need to be prepared for the worst and pray for the best.

She wrote down four possibilities —listed in the order of bad to worse. Infection was our best option, but the most unlikely.  The second best option—leukemia.  Ever since my best friend in seventh grade died from it, that word unnerves me, freaks me out, and almost breaks me down. Now, leukemia is very treatable, especially in children.  And pretty non-aggressive, with no surgery or limb salvage required. Then there were the last two on the list—the aggressive cancers. Cancers that hit fast and grow fast. Osteosarcoma and Ewingsarcoma.  Osteosarcoma is the lesser of two evils.  Both require chemotherapy and limb salvage surgery, but Ewings often spreads to the lungs and radiation is part of the protocol—the treatment plan. And the stats, well, with Ewings, the long-term survivor rates aren’t as high as they are with Osteosarcoma.

X-ray, MRI, a visit to see an oncologist in the city, more X-rays, blood tests, another MRI, biopsy and I can’t get that damn nursery rhyme out off my head –there was an old lady who swallowed a fly. I don’t know why she swallowed the fly… each test leads to another test, which is worse than the one before.  A bone scan–radioactive material is injected into my son’s skin. “For twenty-four hours avoid contact with pregnant woman and children,” warn both the nurse and technician.  Isn’t my kid a child? Eleven-years-old and on the precept of puberty, but still a child. My child.  My baby. A child who has to avoid other children? So is this where the irony begins? I don’t know why she swallowed the fly,  I guess she’ll die….

“Where you coming from?” the officer asks leaning far enough into my window to see that the dashboard is clear– no open bottle of whiskey, no lit crack pipe, no cell phone displaying a text message in progress.

“My son has cancer,” I say for the first time out loud.

“Osteosarcoma,” said the surgeon. The oncologist had already told us this with the social worker at her side, for moral support for us and maybe for her too. Still, we were relieved to hear this news again. One week earlier this would have been devastating, but we had researched all the possibilities and this cancer, though aggressive, is treatable, curable, and thank God, localized in Ali’s right arm.

I almost want to laugh when I think about all the people who over the years lectured his father and me on how we should force him to use his right hand.  “We live in a right-handed world, scissors and guitars and tools made for the right-handed,” people would say. We would always respond, “but lefties are creative.” Still, we worried when we watched our son, who knew his alphabet before he was a year old and could count to a 1000 by 2 years old, struggle to cut a piece of paper with his child-safe scissor made for right handed preschoolers. And a part of us secretly hoped he would be right-handed.  We wanted as few obstacles as possible for our son to overcome in life, and now he faces an obstacle that is greater than either of us ever imagined. Now, we know, if the surgery doesn’t go as we hope and pray it will, and he is to lose mobility in his right arm, it’s not the dominant side, the side that matters most.  And we are grateful for our son’s dominant left hand.  Yes, it is these facts that I cling to for solace on the drive from NYC to Rochester.

I think about all those self-help books I read over the years which say positive thinking and living in the moment will bring happiness, and I want to burn them all.  The book I want to read that’s not on my shelf or the self-help shelves at Barnes and Noble is Smelling the Roses Gets Thorns Stuck Up Your Nose, and this would be placed in the “LIFE SUCKS” section of all bookstores.

“Oh, well, the left is for passing only and you were riding in it for some time…” he pauses and holds his breath.  I’m now looking at him, but he’s looking down at his pad. His pen is drawn, ready to make a move, but he lets out his breath and looks at me, “I did see that you were moving into the right lane when I pulled you over, so I’m going to let you go.  But stay to the right.”

For one split second my impulse is to scream, “I don’t want your fucking pity!” Then I hear Ali’s voice, “Ma, are you crazy? Don’t get the ticket!  Use the money to buy me an Xbox 360 for Christmas!”

“Thank you, officer,” I say, now we are both looking directly at each other, and he smiles. It’s forced, but it’s still a smile.

As I drive off into the snowy night, to the tune of Jingle Bell Rock playing on the radio, I know exactly what I’m getting Ali for Christmas, and it’s not an Xbox 360. It’s the only gift one would get an 11 year-old boy just diagnosed with cancer—a damn puppy. But cancer or no cancer, that kid is walking the dog.

So, now, after a long day at work and long ride in the rain home, I sit on the couch, and I thank God.  After surgery, eight months of treatment, and lots of love and support from so many people, Ali is well. He is cancer-free and walking the dog every morning before school. And every night before bed, well, when I remind him–”Ali walk the dog!” 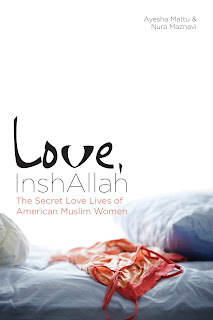 The stories that are included in this anthology are amazing. The writers and their stories are brilliant, brave, bold, and beautiful, and I’m running out of B words, but you get the point. And it seems that the New York Times agrees with me. Cut and paste the URL below and see what they have to say –http://www.nytimes.com/2012/01/24/books/in-love-inshallah-american-muslim-women-reveal-lives.html?_r=2

There are no upcoming events.